This is the start of my new build which will replace the Linux box. The aim of the new PC is a media PC.

The case was available in black and white (I opted for the black). It fits a mATX board and is compartmentalized for efficient air flow. The case felt odd. It was part plastic and metal. Some parts looked as if they should be metal turned out to be plastic and vice versa. It was an odd combination but good use of the two materials.

It comes in a decorated box which is no different than other boxes containing PC cases. The wrapping, however was different. It had plastic around both side panels and even cardboard under the foam to protect the grills and rear panels of the case. Very good work.

Besides the plastic and metal, the case had a brushed exterior with only subtle protrusions like the vents at top and front. The front door was on two hinges so it could open out 90 degrees as well as all the way to 270 (so the door could open all the around onto it’s self). It was kept closed using magents which felt strong enough once it was almost closed.

Opening the door revealed the three drive bays and two (optional) 120mm fan grills with filters. These were used to cool the drive bays which were stacked on top of one another.

Both sides of the case removes very easily. They are on plastic slots and groves which sounds cheap but I actually like because they don’t make that metal grinding noise when you take them off. Both sides are blank with no details. One side was held in with thumb screws and the other with ordinary cross heads.

The back of the case had the hole for the power supply at the bottom of the case. Further up was the expansion car slots. There were 4 in total and were held in by screws. Further up was the IO shield where all the motherboard ports would be. Next to it was the 120mm fan with a removable filter. This fan came with the case. Above the fan was a fan speed switch. It only has levels and controlled the rear and top fans. The top fan was a 200mm! It spanned the whole width of the case with the frame not making the complete square like the 120mm.

All fans have removable filters except the 200mm at the top.

The inside was powder coated black to match the outside of the case. Powder coating the paint should make it more durable to scratches but not impossible. The are hardly any sharp edges.

The lower compartment inside the case holds the power supply and two front 5.25″ bays. In between was a vent with a removable filter. The downside to a split structure such as this case was the physical size it adds to the case. I had seen a lot of criticism on this case because it only supported an mATX motherboard and the size of the case was comparable to a mid tower for a full ATX. The word “mini” on the product name was misleading on the size.

The larger upper part of the case holds everything else; the mATX motherboard, one 5.25″ bay and hard drive bays. The only flaw I can see without building the PC itself was the lack of removable motherboard tray.

It had two removable 3.5″ cages held in by one thumb screw each. They both had a ring pull handle which could be locked into place so they don’t rattle. The 3.5″ drive bays also had silicon grommets to reduce vibration noise from the drives. The two cages mount the HDD in different orientations. The top cage fits more HDD and they go in vertically where as the bottom cage only fits two HDD but they slot in horizontally.

Drive Cage Side By Side

They are both removable but not interchangeable. To swap the vertical HDD mount for the horizontal one you had to remove the internal rails and swap them between the two. It would have made more sense for the two to be interchangeable. The lower drive cage needs to be removed if a long graphics card board is used which was a shame.

There was a 5.25″ drive bay at the top of the case which may or may not be good splitting the bays but I could see the top one as a fan controller / LCD display and the lower two bays used for optical / floppy disk drives.

The case has the standard four expansion card slots at the back (for an mATX case).

I love the look of the case and can’t wait to start putting it together once I scrape enough money to buy he parts.
I’m sure I will pick up more flaws with the case once I start to build it out. The hardest part at the moment is getting an idea what water cooling kit / radiator will fit in the case. Searching the web for answers it doesn’t look like a lot of people have put water cooling into this case. 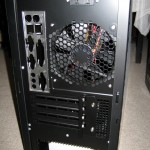 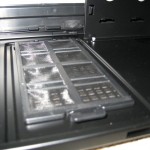 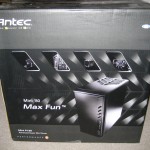 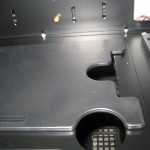 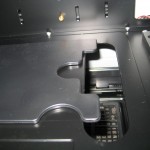 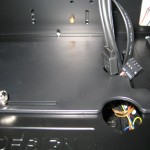 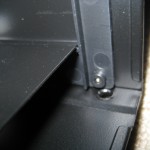 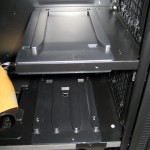 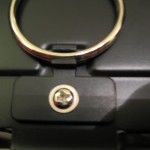 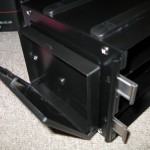 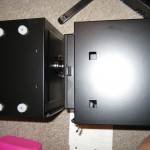 Drive Cage Side By Side 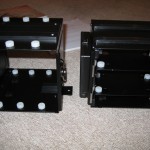 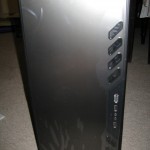 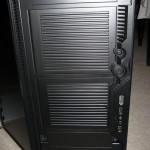 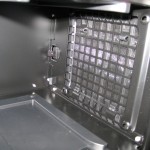 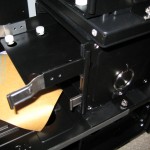 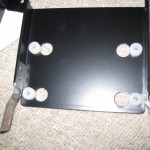 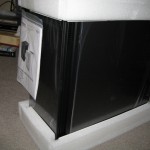 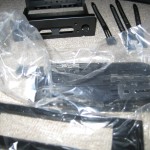 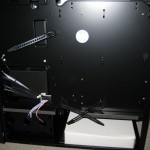 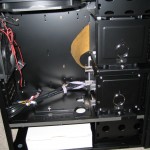 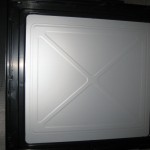 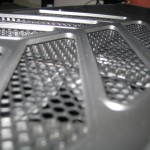 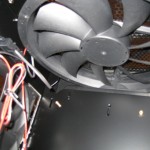 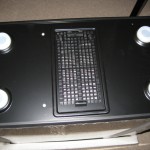 I.T software professional always studying and applying the knowledge gained and one way of doing this is to blog. Danny also has participates in a part time project called Energy@Home [http://code.google.com/p/energyathome/] for monitoring energy usage on a premise. Dedicated to I.T since studying pure Information Technology since the age of 16, Danny Tsang working in the field that he has aimed for since leaving school. View all posts by Danny → This entry was posted in Hardware, Review and tagged 120mm fan, air flow, Antec, Case, computer, Enclosure, p180, PC. Bookmark the permalink.

One Response to Antec Mini P180