I upgraded my RAM from 2GB (4x512mb) to 4GB (2x2GB). It worked flawlessly and I turned on “Memory Remap” because I was using Windows 7 64 bit. The only issue I had was the water cooling pipes got in the way and still not too keen stressing them but it will have to do for now.

I put the sticks in the second slot so there was slightly less stress put on the tubing / RAM stick. It’s worth noting that the old sticks of RAM did not have this problem and it’s caused by the tall heat sinks on the DHX RAM. I went for them because of their timings (CL4) where as XMMS (CL5) are not have this tall heat sink.

I did try 5GB (2x2GB & 2x521mb) but it BSOD’d as soon as Windows booted. I did not try further as I had planned my old sticks to go into a new build. I only tried the Patriot RAM and not the Corsair pair.

Upgrading from 2GB to 4GB has caused my Creative X-FI sound card problems. It has hissing/crackling sound which is constant when sound comes out of the speakers. Doing some searches I have found some people have had this problem because of the 4GB RAM where as some others have it working with 4GB. I narrowed down the problem between the nForce nVidia chipset, Creative drivers or Windows itself but have not found a fix. My work around at the moment is using the on board sound card which doesn’t support my surround sound speakers very well. Maybe a fresh install with the 4GB will cure it.

In terms of performance I see RAM usage around 50% with normal desktop apps and Eve-Online running in window mode. Before with 2GB the RAM would be around 80%. I have no other real benchmark to go by. 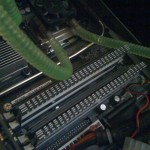 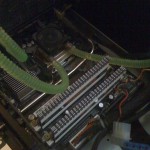 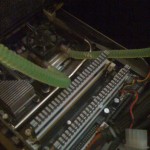 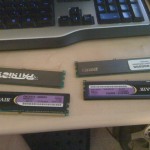 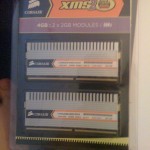 I.T software professional always studying and applying the knowledge gained and one way of doing this is to blog. Danny also has participates in a part time project called Energy@Home [http://code.google.com/p/energyathome/] for monitoring energy usage on a premise. Dedicated to I.T since studying pure Information Technology since the age of 16, Danny Tsang working in the field that he has aimed for since leaving school. View all posts by Danny → This entry was posted in Hardware and tagged Asus, asus p5n32 sli deluxe, BSOD, Corsair, crackling sound, creative drivers, DHX, Eve-Online, memory, nforce, nvidia, Patriot, RAM, SLI-Deluxe, sound speakers, water cooling, Windows, XMMS. Bookmark the permalink.