One of the first mod to a Honey Bee is the fuse mod. This mod adds 2 fuses to the helicopter between each motor and the 4 in 1 (4-1) controller. This is to prevent a power surge reaching the controller. This can happen when the propeller stops spinning and power is not reduced for example during a crash. If the person doesn’t doesn’t cut the throttle fast enough then the electricity will goes to the motor but because the the motor can’t spin the propellers it’s not using up all the power and that then goes to the controller which can’t handle it.

I acquired most of the parts from Halfords. Whilst it was not as cheap as it use to be, it’s better than replacing the 4-1.

The two fuses are used for each motor. The main motor which turns the main blades is bigger than the tail rotor and have different power ratings. I chose mini car fuses for it’s size and price but normal and micro sized fuses will also work. The spades are used to as the fuse holders. It’s best to them sleeved because they are quite close together and can cause a short, by passing the fuse. I also bought a set of spare motor wires in case I screwed up the mod. Also it meant I didn’t have to splice the cables.

There are different sized spades and it’s a judgement call as to what size is needed depending on the size of the fuse. Micro and Mini fuses should be interchangeable but the normal size fuses may need a bigger spade.

Fuse Price comparison:
All fuses were the same price for different ratings. It was the size that determined the price. All fuses came with 2 in a box. Prices are correct to 09/11/2011.

The table above illustrate the price difference is largest between mini and micro fuses (55% increase) where as the normal to mini size is marginal (11% difference). Also the biggest difference in physical size is going from normal to mini. Halfords also sell LED mini fuses which light up when a fuse is blown. These cost more than the micro fuses at £3.29. Whilst they are nice to have it is not very cost economical if they need replacing a lot (depends on how often the helicopter crashes badly).

First turn off the helicopter if not done so and remove the canopy.

Cut the cable ties holding the wires. This gives the wires some slack to work on them.

Take note which way the wires go into the 4-1. In the above picture, both were positive on top.

I will detail the steps I took which included using the soldering iron, extra motor wires and heat shrink wrapping instead of sleeves (turned out better than sleeves for holding the wire to the spades better)

Once both mods are done perform a small test flight, easing the power in and letting it off and then more power and letting off. By repeating this process you’ll eventually lift off and “land” again to ensure nothing is loose. I found that the my crimp wasn’t as secure as it should be so every time the fuse moved it would stop and start the motors. This would be catastrophic if it happened in flight.

This mod is very good and should come with the helicopter… but it doesn’t. I have already replaced the fuse twice! 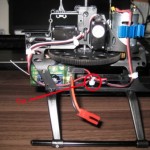 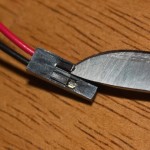 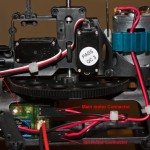 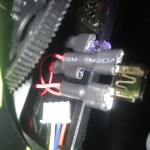 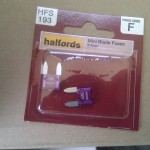 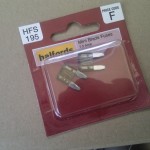 I.T software professional always studying and applying the knowledge gained and one way of doing this is to blog. Danny also has participates in a part time project called Energy@Home [http://code.google.com/p/energyathome/] for monitoring energy usage on a premise. Dedicated to I.T since studying pure Information Technology since the age of 16, Danny Tsang working in the field that he has aimed for since leaving school. View all posts by Danny → This entry was posted in RC and tagged car fuses, ESKY, fuse, fuse holders, fuse mod, Halfords, helicopter, Honey Bee, micro fuse, V2. Bookmark the permalink.