Trying to install the VirtualBox guest additions in a non desktop system I encounter errors. Luckily the solution wasn’t too difficult to fix.

Use the Virtualbox menu to install the guest additions CD image

Run the installer on the CD:
sudo sh /media/cdrom/VBoxLinuxAdditions.run

Expect the “Installing the Window System drivers” to fail because on a server X windows (GUI) is not typically installed and therefore is not relevant.

Not as simple as the desktop version but for a non GUI installer it should not be beyond many people who are familiar with command line. It’s a shame Oracle hasn’t improved the script for the server edition. 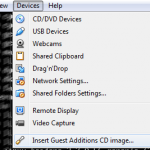 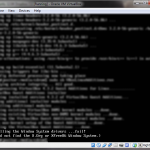 I.T software professional always studying and applying the knowledge gained and one way of doing this is to blog. Danny also has participates in a part time project called Energy@Home [http://code.google.com/p/energyathome/] for monitoring energy usage on a premise. Dedicated to I.T since studying pure Information Technology since the age of 16, Danny Tsang working in the field that he has aimed for since leaving school. View all posts by Danny → This entry was posted in Linux and tagged CD, kernel, Linux, ORACLE, Sudo, VBox, virtualbox. Bookmark the permalink.