I have finally made the switch to Gigabit networking! Thanks to an Amazon deal I bought some switches to kit my network out. Because I do move large files about such as video files as well as streaming from all thanks to the lovely invention of PVRs.

My current set up has three switches, one in the lounge and one in the bedroom because both rooms have two or more devices that has a network connection. Both rooms were using a router as a switch. The rooms joined in the middle which is the hall way where the router is located. All of this was using the 10BaseT100 spec networking devices.

I wanted to get an idea of the increase in speed so I decided to copy a large file from one room to the other. This meant that the data travelled through all 3 switching points. The transfer speed seemed above 100 megabits so it was good.

In no way is this a completely scientific test but it’s enough to give me a comparison.

Amazon had an offer on for Netgear GS608 so I bought three of them to replace or work along side the existing hardware. These are Netgear’s consumer gigabit switches so they are made out of plastic compared to their metal, more expensive higher end products. The switches are unmanaged and has eight gigabit switch ports which are also backwards compatible to 10 and 100 megabits.

The package comes with a stand which can be used to stand the switch vertically which is a nice touch. The plug is not as big as some of the old routers I’m replacing but it is still big.

With the switches in place I copied the same file from the same computer which means it will go through all three switches again. The speed difference is very noticeable.

The speed bump from 100mbps to 1000mpbs is amazing. It is well worth the money if the you are moving large files on a regular basis or if streaming slows down due to traffic load. 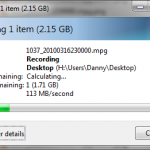 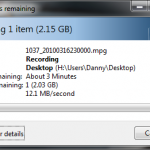 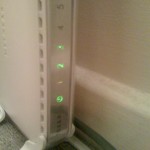 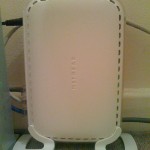 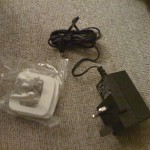 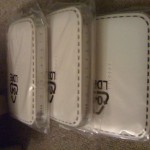 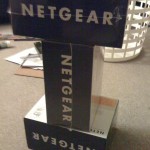 I.T software professional always studying and applying the knowledge gained and one way of doing this is to blog. Danny also has participates in a part time project called Energy@Home [http://code.google.com/p/energyathome/] for monitoring energy usage on a premise. Dedicated to I.T since studying pure Information Technology since the age of 16, Danny Tsang working in the field that he has aimed for since leaving school. View all posts by Danny → This entry was posted in Networking and tagged 100mbps, BaseT, Gigabit, gigabit switch, Megabit, netgear, netgear gs608, Network, Networking, router, Switches. Bookmark the permalink.