I picked up a new Samsung Galaxy Tab 8.9 which fulfills a want since these beautiful devices have come out. I hope this will replace the netbook that is the current travel companion which was a Acer Aspire One E255 at the time of writing.

I wanted to stay and support Android and with Ice Cream Sandwich announced to go onto the tab by Samsung I know it will be supported for a while longer. The fall back is as always the flash / ROM scene such as Cyanogen Mod.

This put Samsung in a good place. Xoom 2 was only just released so there were none on the shelves when I was browsing (for several days) and then there was the Sony Tablet S. The specs were relatively similar (16GB, nVidia Tegra 2, 1280 x 800 (WXGA), 802.11n) but I wanted 3G which the Sony did not have but Samsung lacked SD card slot. The Sony was priced the same as the iPad 2 WiFi on offer. I went for Samsung in the end.

The next decision was the size. There were 10.1 and 8.9 in stock but no 7 inch. It was a hard decision between the 2. The 10.1 came out before the 8.9 and a lot of accessories are designed around the 10.1. The up side to the 8.9 is that it has all the same specification as the 10.1 but squeezed into a smaller form factor. This means the DPI is higher because the pixel count is the same all be it on a smaller diagonal screen and according to reviews the internals have been moved around and made it more balanced to hold.

The box was smaller than the iPad 2 but at the same time had a lot of wasted space. The tablet sat on top of a layer of card which hides the bundle accessories:

As part of a “gift” with the purchase of 2 Samsung Galaxy Tabs we got free screen protector (which I poorly placed only to be salvaged by my brother Tommy Tsang), a HDMI cable and a 8GB Sony memory stick. I think I would have preferred the memory card reader instead but the HDMI cable was more expensive RRP.

I got the black version of the tablet but there is also a white one. The only difference is the back which have the different colours. It’s a shame the front bezel does not have the matching colours like the iPad 2. The unit feels solid and well built with no flexing at all.

The glass front stretches all the way across to the frame which is nice but the frame edge is raised higher than the glass. The frame edge is coated in metallic looking paint but it’s made of plastic. The back has a software rubber touch which is nice and does not feel as cold as the glass on the front. The bezel width is less than a thumb widths thick but enough room to allow a person to hold on to the device without touch the screen.

The Samsung badge is on the front and back and suggests the natural tablet orientation is landscape. In landscape orientation the speakers and dock connector is at the bottom edge below the Samsung logo. The dock connector resembles an Apple connect but it’s proprietary. I wish Samsung had stuck with the standard micro USB like it’s Samsung Galaxy S2 phones! The power, volume buttons and 3.5mm headphone jack are at the top edge of the tablet offset to the left.

The sim card slot is on the top edge offset to the right. There are no labels describing what the ports or buttons except for the sim card cover do but they are intuitive. Even with the label on the sim card cover it is not obvious which way round the sim should be inserted unless you consult the quick start leaflet.

P7300 came with Android Honey Comb (not sure which version) but immediately I performed a system update. In order to do this I had to add my Google account and also sign up for a Samsung account. I think it should be able to do an update without having to set these up. Once that was done it took approximately 20 minutes after downloading the update to install. It required a reboot as well and I could see it updated the baseband version to P7300XXKJ6. The new Android version was 3.2 with Kernel 2.6.36.3. One problem that occurred was the Android market place on the home screen stopped working after the update but it just required the icon to be removed and re-added to the screen.

The tablet comes with Samsung’s TouchWiz interface. It looks fairly similar to stock Honey Comb but with a few different bits here and there. The best part of the interface is the mini apps. These app shortcuts are overlayed on top of any app and allows the apps in the mini app bar to be accessed.

The problem with the software is lack of customizability. Coming from a phone with Cyanogenmod it seems very locked down. The widgets are fixed to certain max and min size which does not allow it to be stretched across the screen. The apps in the mini app bar can not be changed and the software includes software which I do not use and cannot be removed such as Pulse News.

Another criticism is home button. On the iPad this is a hardware button where as the Sammy tablets it’s software. This is not a problem for me but what is a problem is the UI thread priority. With a button it’s a hardware which can send interrupts to the software. On Android Honeycomb the software buttons at the bottom (including the home button) seems to run in the same UI thread and therefore it stops responding when something hangs. The button is very important because it should stop and kill any app. There have been several times where I have to press and hold the power button to turn off and on the the Galaxy Tab again. This brings me to another point. There is no restart in the power button menu!

The battery life on the tablet is very good so far. I am able to get a day of on off use for general browsing and using apps and games. I generally play games on it for approximately 1-2 hours total a day but not all at once. At the end of the day it usually has about 15% of battery life left.

I have the screen brightness on auto and screen timeout on 2 minutes. I have wifi ‘n’ turned on at all times as well.

One of the annoying things I have found is the lack of task manager in a situation where large amount of resources are in use. Whilst it has a task manager, it is an app with what seems to be the same priorities as other apps so when an app like Skype keeps hogging the resources you have to wait for it to finish to turn off and on the device (there is no restart option).

Live wallpapers also seem to slow down the animations on everything. It is very noticeable especially when scrolling lists.

I have found it hard to find accessories in brick and mortar stores for the 8.9 Tab. Most of the items on display here in Hertfordshire are either iPad 2, Motorola and if any are Samsung accessories they are for the 10.1 version. Online shops are better but it’s very hard to tell if the accessory is compatible with 10.1, 8.9 or both due to lack of descriptive information on products.

I even purchased a AO case and it’s flawed in design. The top front edge of the case flips up as if there is not enough slack or something along those lines.

In the end I returned the case and got the official Samsung Book style case which comes in black (EFC-1C9NBEC) and ivory.

I like the tablet overall but it does have some problems (typical Android products?). The hardware is very slick and nice. I feel Android is more or less on par with Apple but the software still needs refinement. 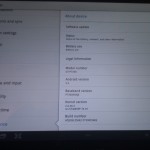 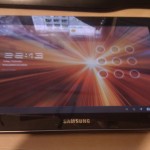 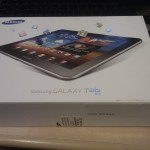 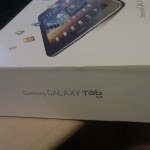 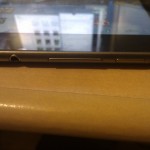 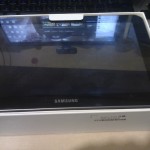 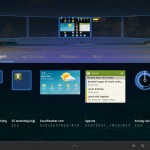 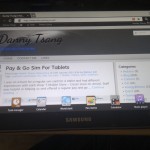 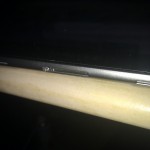 Samsung Galaxy S And Galaxy Tab Not Getting ICS

I.T software professional always studying and applying the knowledge gained and one way of doing this is to blog. Danny also has participates in a part time project called Energy@Home [http://code.google.com/p/energyathome/] for monitoring energy usage on a premise. Dedicated to I.T since studying pure Information Technology since the age of 16, Danny Tsang working in the field that he has aimed for since leaving school. View all posts by Danny → This entry was posted in Review, Tablet and tagged Acer, Android, Apple, Cyanogen, dpi, Galaxy, HDMI, Honeycomb, ICS, iPad, netbook, nvidia, ROM, samsung, Samsung Galaxy Tab, sd card slot, sony memory stick, Tab, Tegra, TouchWiz, Wifi, WXGA, Xoom. Bookmark the permalink.