The new version of Ubuntu was released last week on Thursday (29th October 2008) with Ubuntu 8.10 “Intrepid Ibex”. There have been many talks and reviews about the new release and people even think it’s a more stable release than 8.04 – Hardy Herring which was designated the Long Term Support (LTS) edition. I wanted to hold off from installing the new version because previous versions needed time to back port all the applications before I considered it useful. 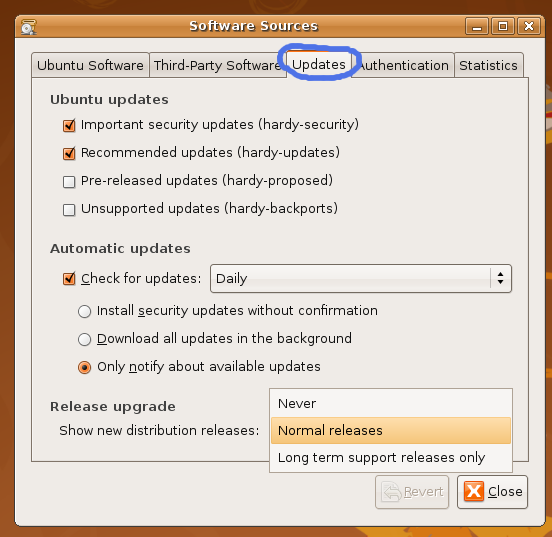 I downloaded the ISO image of Ubuntu. It’s no bigger than the size of a CD and there are multiple versions like Desktop, Server, Alternate, etc. I downloaded the Desktop edition on my MacBook Pro and burnt off the ISO using Disk Utility. I made two copies and both had problems leading me to believe that either the CD’s were bad or the Disk Utility doesn’t burn things properly. I have limited blank CDs so I could not afford to burn a third copy. I usually try to do a fresh install but this has left me to download the alternate ISO, mount it and install it from there. There is a Ubuntu guide for this process which documents:
Change the Software Sources settings to “Normal releases” instead of “Long term support releases only” in System > Administration > Software Sources under the “Updates” tab. Once the release upgrade has changed I mounted the ISO using the following command:
sudo mount -o loop [path]/ubuntu-8.10-alternate-i386.iso /media/cdrom0
where [path] is the path to the ISO. If an upgrade dialogue does not appear use this command to invoke the upgrade process:
gksu "sh /cdrom/cdromupgrade"
then follow the on-screen instructions. The whole upgrade process took less than 20 minutes.

Before I rebooted I removed all my Gnome settings using this command in the terminal:
rm -rf .gnome .gnome2 .gconf .gconfd .metacity from the LinuxFUD site. Once I rebooted all the settings took effort from the upgrade to the default Gnome settings. I restored the Gnome settings so I can see what the new version looks like as if it was new.

Once the login popped up, there was no sound! I logged in and the sound was muted. I unmuted it but there was still no sound. I ran through the tests in the Sound settings and nothing. I tried all the sounds settings but it still didn’t work. What ended up happening was the master volume was unmuted but all the other sound controls like PCM, PC Speakers, Mic, Line In, etc was muted and volume was all set to the bottom (off). These can be found in the Volume Control (Right click volume control in the panel).

I.T software professional always studying and applying the knowledge gained and one way of doing this is to blog. Danny also has participates in a part time project called Energy@Home [http://code.google.com/p/energyathome/] for monitoring energy usage on a premise. Dedicated to I.T since studying pure Information Technology since the age of 16, Danny Tsang working in the field that he has aimed for since leaving school. View all posts by Danny → This entry was posted in Linux and tagged Desktop, Gnome, Intrepid Ibex, ISO, Linux, LTS, MacBook, PC Speakers, server, Ubuntu, Updates, Upgrade, volume. Bookmark the permalink.