I found Sun’s VirtualBox and thought I’d try it out. As everything is going virtual and having used it in Mac I thought it was time to step it up in Windows so I can start running things like Linux and maybe other Windows under my main desktop. This allows me to play about without worrying about destroying my main PC and spend a day restoring everything.

For this review I am using Windows 7 as the host environment and Ubuntu 9.04 as the guest.

Creating and installing Linux under VirtualBox brought some interesting concept which I have not seen and would love to see in VMware Fusion. The Virtual Media Manager was a great idea. This allows you to control virtual HDDs to Floppy disk images. This means you create your home HDD which can be mounted on multiple virtual environments for example. All the steps in creating them is done once and can be re-used many times.

To get Ubuntu installed I decided to create a root partition which would also contain the swap drive and a separate partition for the home directory. Also I had to add the ISO image of the install CD.

The next step was to create the VM itself. Pressing new in the toolbar starts a wizard which prompts for the settings of essentially the emulated hardware the virtual machine would run and allocate resources. The wizard made it user friendly and easier for beginners to create. Once created the system should be ready for the install. The only criticism I have with the wizard is the defaults it presents to the user. For example the default video RAM is set to 12MB which is very low.

Starting the VM shows a similar boot and install process to a physical computer. The VM locks the mouse cursor to the VM window and by default pressing the right ctrl will unlock it from the environment back to the host. Simply clicking back inside the window locked it again.

The install process went smoothly and I proceeded to install and set up the VM on post install with no problems.

The VM comes with Ubuntu compatible “Addtions” which installs some drivers and software to make it interact with VirtualBox. The most noticeable advantage to installing the additions is the display drivers. Without it Ubuntu’s X Windows system limits the max resolution without some hacks.

VirtualBox doesn’t look to suffer from any performance or hardware issues. All sound and other hardware related devices seem to work well without any glitches.

VirtualBox’s first screen shows a list of virtual machines set up on the left hand side and the selected VM settings on the right. This is a very simple yet effective display of information about the VM and the toolbar makes creating, changing settings and starting VMs very simple.

The screen allows the user to also delete the VM listed. Once a VM is running in a separate window, this screen can be closed without closing the VM itself.

VirtualBox features the ability to take “snapshots” of the VM state. Once created, the snapshot is a freeze of the current state and allows the user to restore back to the state at any given time. This makes trashing and restoring a VM a trivial process hence great for development and testing things.

For a free tool it does all the basic things I need in order to run Ubuntu / Linux. I do miss the seamless mode where it integrates the guest OS with the host and the program does not run in a window. Besides this factor there is not a lot more negative points about it and it can only get better. 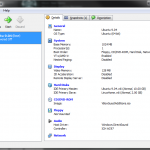 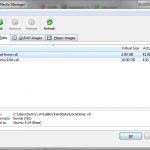 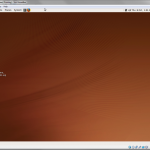 I.T software professional always studying and applying the knowledge gained and one way of doing this is to blog. Danny also has participates in a part time project called Energy@Home [http://code.google.com/p/energyathome/] for monitoring energy usage on a premise. Dedicated to I.T since studying pure Information Technology since the age of 16, Danny Tsang working in the field that he has aimed for since leaving school. View all posts by Danny → This entry was posted in Linux, Review, Software, Windows and tagged fusion, iso image, Linux, Microsoft, physical computer, sun, Ubuntu, ubuntu 9.04, virtual environments, virtual machine, virtual media, virtualbox, vm, windows 7. Bookmark the permalink.